In this blog-post I would like to talk about some recent effort we have done to improve the Reaching Definition (RD) analysis inside angr, and how you can use it in your projects. Straight from compiler theory, a reaching definition analysis is (in very simple terms) a static program analysis technique that can help us answer which are the possible definitions for a specific variable at a particular line of code.

Here we can use RD by placing a -so called- observation point at [5] and ask “which are the values we can observe at [5] for variable ‘a’?”. The answer in this case will be 4. If we would have asked the same question at [8] the answer would have been 2 and, eventually, asking this question at observation point [9] would have given us both 4 and 2 as an answer. If you are confused regarding the latest answer, keep in mind that this technique is purely static: the analysis simply observes that since the var ‘c’ has no specific value we can take both the branches of the ‘if’, therefore, ‘a’ can be re-defined with 4 or 2.

Now, let’s spice this up a little bit. 🌶️

When doing binary analysis we don’t have the luxury of having the source code of the application we are analyzing, and chances are that, if you are using angr, you are exactly in this situation. However, variables are just fancy programming language abstractions and under the hood they are stored in memory and registers. Therefore, we can use the RD analysis to reason about those entities and getting nearly equivalent results.

If we think about the previous program in (totally unoptimized) assembly:

Now, we need to define an observation point and understand the question we want to ask to get the result we want. For instance, if we want to ask, like before, which are the possible values of the var ‘a’ in the branch where ‘c’ is equal to 3 we would need to ask “which are the values we can observe at [9] for register rax?”.

This technique is the foundation for different analyses at the base of vulnerability hunting tools, static taint engine systems, function prototypes recovery routines, constant propagators, and so on. We extensively use this in angr to accomplish a different kind of tasks because its speed, compared with analyses based on Dynamic Symbolic Execution (DSE), it’s amazing. Personally, I’ve been able to speed up things from taking an hour (using DSE) to minutes by simply re-thinking them using this approach!

Let’s go through some real code that will, hopefully, clarify how to leverage this feature and how to eventually hack into it (recently there have been many questions on our slack and I thought this blog-post might have been useful for some researchers).

For the purpose of this example, I’ll go through a real problem I had to solve for my current project. In particular, I wanted to collect all the locations in a given binary where the return value of a function was consumed as an argument for a memcpy. For instance:

For most of you this problem probably already triggered the word “taint engine” in your minds, but, how can we practically implement this in angr? A friend and colleague of mine (@badnack) already proposed a solution here. However, while this approach can be useful in some situations, it doesn’t really fit my case mainly for 3 reasons:

The intuition here is to try to implement the same technique we would manually use to spot these dependencies: look at the code and simply look at how variables are defined and use in the function. In the following screenshot, you can see how the variable v25 is defined by the memb_alloc and consumed by memcpy.

The idea here is pretty simple: we want to set an observation point at the memcpy call (address 0x37CA) and then ask for seeable definitions for the register r0 (the one that is holding the v25).

Zooming out this basic block it’s interesting to see where it is placed inside the CFG of the function under analysis (in green). 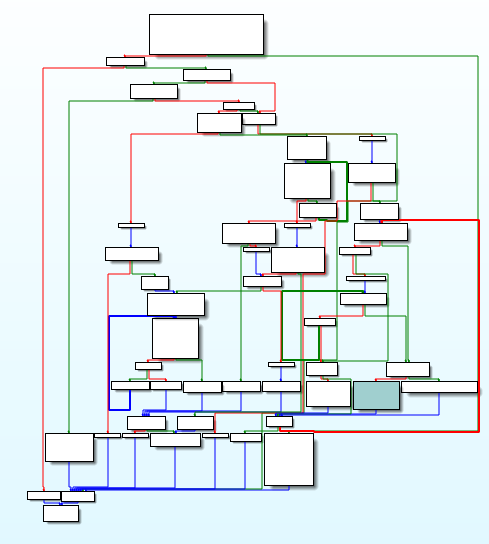 Let’s start to write some code:

This will specifically run the reaching definition analysis over the target function 0x3609 by using as an observation point the call to the memcpy at 0x37CB (note that you can set multiple observation points if you wish).

By investigating the results object we can get the information regarding the register r0:

The result is telling us that the latest instruction that defines the register r0 -before calling the memcpy- is at code location 0x37c1 (for those curious: id is the basic block address and 36 is the VEX statement), but its value (in the DataSet) is Undefined. Why is that? To understand let’s take a look at the instruction at 0x37c1:

The definition of r0 is coming from whatever value r0 was holding added to 0xc. But what was the value of r0 at this point? Well, that’s again a question for RD:

Well, the RD analysis is smart enough that, by making use of the function’s calling convention (CC), knows that this function is going to return stuff, and under the current CC this “stuff” is returned inside r0, therefore, r0 is actually redefined here. This information is integrated inside the Definition object we got as a result. We can see that, indeed, the Definition has been tagged with a ReturnValueTag, pointing out that not only the content of r0 is the result of a function call, but also that the function that has been called is 0x3a3d. 🏷️

Now we can easily understand why the value observed at the call to memcpy was Undefined: RD didn’t know the value returned by the function 0x3a3d, but simply that r0 it’s going to be redefined. Given that, it assigns an Undefined value and when later the RD engine has to sum up Undefined + 0xC everything is merged into Undefined (for people familiar with data-flow analysis this is basically merging to Top).

The tagging mechanism for these definitions has been recently introduced and I really believe empowers a lot of smart reasoning about these chains of definitions of registers. In particular, I’m gonna leverage this exact mechanism to solve the problem we were discussing at the beginning.

Recalling the problem: we are trying to spot situations where the first argument of memcpy (held by register r0 in this architecture) is the return value of another function. The idea is pretty simple: automatically walk back the definitions chain for the registers we need (by using the dep_graph) until the definition is not Undefined anymore (in that case it would mean that the argument is a constant) OR until we hit a Definition node tagged with a ReturnValueTag.

We can picture this in the following way: 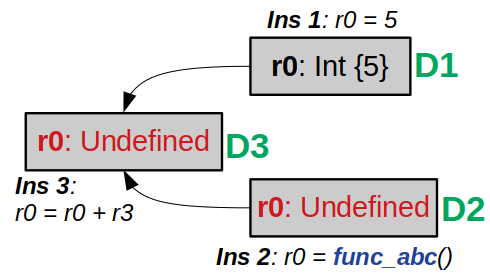 The r0’s definition flowing inside memcpy is the one at D3, since this has the Undefined value we will walk back the dep_graph and eventually find D1 and D2 (in this case 2 different paths can bring us to ins3). D1 has no interesting value for our purpose since it is a constant, but D2 instead will be tagged as coming from function_abc. (quick note: the graph presented above is actually a simplification of what we can actually see if we would have dumped the dep_graph object with networkx).

Now that the approach is clear, it’s time to write the code to implement this analysis.

And as a final result: in FUNCS we can see all the functions that are providing values to the r0 argument of memcpy:

Hopefully, this blog-post gave enough information to start to hack into RD, feel free to ping us on our slack for any questions, we have a pretty active and excited community over there!

UPDATE 11/4/2020: More material and information regarding this technique is provided by the current maintainer @pamplemousse.
Specifically, here you can find some slides, and here a guest lecture done for the ASU Security class.